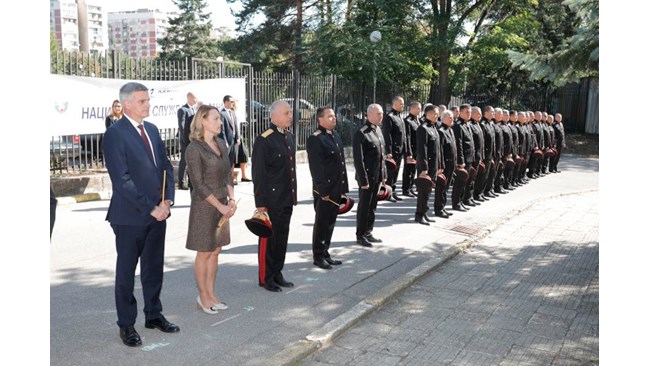 BSP and DB are against, but did not make any changes

The head of the relevant commission Svetlin Stoyanov: Now security guards are dying from stress

GERB: Let’s reduce their budget then

The Chief Prosecutor, the First Lady and the Presidential Administration will be left unguarded by the NSO – this controversial legal change is at the photo finish in the 46th Parliament. The competition is timed, more precisely with the presidential decree on the dissolution of the National Assembly. If there are more meetings, the draft is fully ready to pass the second reading at 12 without 5.

and its path meandered like everything created so far by the 46th National Assembly.

Initially, the law was declared not adopted in the plenary hall, because 102 deputies voted for it out of the required 121 for a quorum. Then it was decided that this was OK (how it happened – see below).

The changes in the Law on NGOs are not aimed at employees, the circle of security guards should be reduced, not the service should be used as a symbol of prestige and social status, said Miteva on Sunday during her participation in the celebration of 142 years of NGOs. It would also ensure greater transparency in its work, greater public confidence in it and better governance.

Today, the texts will be considered extraordinarily by the leading committee – the one for control of the services. Attempts to convene the commission last week failed due to the midnight vote on the budget update.

first did not pass,

and it turned out to be accepted?

After heated debates in the first reading, the protest parties voted in favor with the support of one of the MRF – Hamid Hamid. He jokingly announced that he had given it symbolically on behalf of the whole group.

It was not legally clear how to clear up the problem of lack of quorum, which should make illegitimate all decisions of the National Assembly taken in this situation. Miteva first said the law itself had been passed, but the presence of less than 121 deputies in the hall repealed it. A day later it was edited – it passed legitimately on the 1st reading. They argued in the courtroom, but left it at that. GERB are staunch opponents of the changes. The head of the group Desislava Atanasova has made amendments between the 2 readings to cancel most of the ideas.

According to the Miteva project, the chief prosecutor will not be deprived of his specialized transport, but will no longer be guarded by NGOs. Only in “cases of threat” such protection will be provided, ie. he must ask for this, and a commission in the NSO must decide that there is a need.

Miteva and the group of “There is such a people” also want ministers, deputy chairmen of the parliament and the mayor of Sofia to no longer be able to drive in NSO cars.

According to the current law, the former prime ministers and chairmen of the National Assembly enjoy security 4 years after the end of their term, and the presidents – for life. The amendments, passed at first reading, shorten the term to 6 months, in case of “complicated security environment and specific threat”.

The Prosecutor General, the First Lady and the Presidential Administration to keep their security, to remain 4 years of security for the former prime ministers and chairmen of the National Assembly, have been submitted by GERB between the two readings. Desislava Atanasova proposes the former prime ministers, presidents and chairmen of the National Assembly, if they decide

but only if there is no threat to their lives.

“All the requests that Iva Miteva herself made – that NSO should not be a transport company of either the Council of Ministers or the presidency, her proposals give the opportunity, if necessary, and request to have the same functions. That is, he is doing absolutely nothing but wanting to remove the security of the Prosecutor General and the former Speaker of the National Assembly and Prime Minister. This is the whole great legislative procedure for her “, Atanasova commented for” 24 Chasa “.

The quality of work of the security guards at the NGO will increase and the incidents in their work will be reduced. Also, the chairman of the parliamentary commission for special services Svetlin Stoyanov from ITN explained the idea.

“Imagine what this calendar year is like and we have 3 parliamentary elections, each has a new chairman elected and each is guarded by 3 NSO teams. Each of them will be able to use security for 4 years, regardless of the fact that they have been presidents for one month. “These security guards will be busy with just that and can’t help with a really important event,” he told 24 Chassa.

Stoyanov himself is a former NSO employee and says security guards are overtired and even dying from stress. “Since 2016, I have been at the embassy of Saudi Arabia and we guard the residence with 30 people. 80% are former NSO employees. So far

both from NSO. One had a brain tumor, got it in 2010 in the NSO, and the other died of cancer, “says Stoyanov.

According to Desislava Atanasova, however, the reduced work of the NSO would raise a reasonable question – whether not to cut people, or to reduce the budget of the service by BGN 47 million.

The BSP and Democratic Bulgaria do not approve of dropping the specialized guard for the chief prosecutor, a 24 Chasa poll with MPs from both groups showed. Because the chief prosecutor, no matter who he is, must be able to do his job calmly and safely. The left is also skeptical about the short period in which former prime ministers and heads of parliament will use cars and NSO security.

However, both groups did not take the opportunity to submit proposals before the second reading.

Stoyanov is skeptical that the law will be finally adopted because

from the changes with the removal of security for his wife and the administration. According to him, Rumen Radev will not wait for this law to be considered by the deputies, although according to the chronogram of the CEC he can issue a decree no later than 57 days before the date of the vote, ie. in principle, parliament can work until the end of the week.