Why is El Salvador experiencing a third outbreak of covid-19 infections? 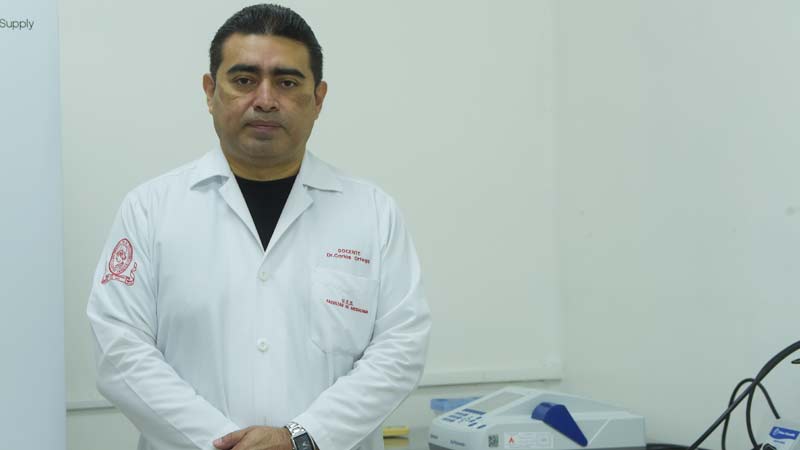 Dr. Carlos Ortega, a specialist in virology, explains that “there are variant sublineages of the virus that cause reinfection,” and warns that there is data that suggests that the Coronavac vaccine is less effective than the rest.

Dr. Carlos Ortega speaks of the Coronavirus from double experience: as a virologist, he has worked for months in the study of SARS-CoV-2 and its genetic structure in the laboratory of the University of El Salvador; as just another citizen, his family got infected and they had to fight the disease.

“We have seen more people hit by the disease, more people saying ‘my son, my neighbor, my brother is complicated’, we see how the circle is closing,” warns the virology specialist. Why have cases risen and we are experiencing a third outbreak? We talked about that and more in this interview.

The virus specialist from the Faculty of Medicine of the University of El Salvador comments on the third wave of COVID-19 cases in El Salvador, vaccines, reinfections and lack of official data

Why is this third outbreak of covid infections occurring in the country?
This behavior was already expected, what’s more, a fourth wave is still expected. Countries like Mexico, the United Kingdom and other South Americans are in a third wave and some in a fourth. Of course, we would hope that this fourth wave is with fewer deceased and complicated patients, that it is not like this third, which is causing havoc. We are with a number of deaths similar to the moments when the situation with the restrictions was tense.

But what is causing this new wave of cases?
This can be explained by the appearance of variants of the virus, but these variants have been generating subvariants or sublineages, and some of these have been prevailing with a little greater transmissibility, and this can cause us new infections and even reinfections. In addition, the population has stopped taking biosecurity measures, it has been neglected.

So the virus is reinfecting more people who already had it?
This has already been seen in other countries, of people who had been infected by a variant of interest or not so transmissible, and that with the advent of the delta variant, or worse still, with a subvariant of this or the lambda variant of South America , at some point they may present greater transmissibility and that they can be reinfected.

There is data (globally) that out of every five to six people one is reinfected, by the new variants. We are crossing both new and reinfected infections, even though they have the vaccine.

Are there sublineages of the delta or another variant already circulating in El Salvador?
At this moment, we are not certain (that they are here); but as an example, worldwide there are more than 50 sublineages of the delta variant. In Mexico, in the behavior of the betray variant that has prevailed over the rest, around 26 sublineages have been detected.
With the sublineages of the delta variant, possibly in some regions or departments it can generate a behavior of greater transmissibility; they can generate scenarios like the one we have in our country, that we came from a stage of being with flat data (without an increase in cases) and suddenly we started up, and we still do not see where it begins to decrease.
Studies have to be done, but what we are seeing could be the result of the subvariants that are circulating in the country.

According to official data, in El Salvador at least 55% of the population has already received two doses of vaccine. Why then is there a rise in deaths from covid-19?
Let us remember that most vaccines have greater efficacy for the original strain and for the mutation profile that was incorporated into the vaccines; but the virus has been mutating, and has been modifying the efficacy of vaccines in terms of variants.

In addition, the variants and their sublineages have a local behavior that is not homogeneous, and there may be situations of subvariants that do cause cases in vaccinated people and people who have been infected.
It must be clarified that vaccines, given the genetic variability of the virus, are not as effective in preventing infection. The efficacy of the vaccine must be measured in terms of preventing the person who becomes infected from becoming serious or life-threatening.

What do you think about the lack of official information regarding the vaccinated people and if they have reached cases of hospitalization or death?
The data are there, because in the system that cares for patients, those infected, admitted to hospitals, those who have become complicated and the deceased, one of the data they have is the vaccine they have received. Yes there is the data. That they are not made public is another matter. I understand that no alarm should be generated, but for the scientific community and the population, they have the right to know what happens.
We are doing a survey; We hope in a few days to have the results of a small study on the people who have suffered the infection in the last weeks and what vaccine they have received.

What are you looking for with the survey?
We were struck by the fact that in countries like Chile, which had a high percentage of vaccination, mainly with Coronavac-Sinovac, which was being carried out here, the rate of reinfection and new infections in people who had been vaccinated with Coronavac showed higher percentages than those who were vaccinated with another brand, such as Pfizer or Moderna. It appears that the Coronavac vaccine protected less. In some ways it was to be expected, because in phase 3 trials, it is the vaccine that showed the least efficacy.

Are there new variants in the country?
At the moment there is nothing new, only the surveillance of the sublineages, which we hope to have information in the coming weeks, and to be able to see their behavior in the country, and perhaps have more answers about what is happening.