War in Ukraine. Latest information on May 14 [papildināts 19.26] 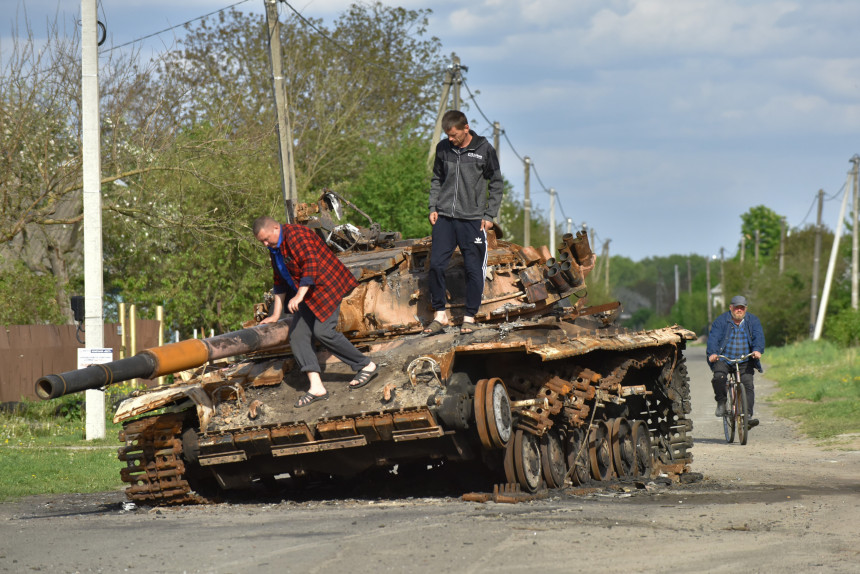 Live text – short and concise on the highlights of Russia’s war in Ukraine on May 14. For the third month in a row, Ukraine has been heroically defending its land against the aggressor’s invasion.

19.26. Portugal has blocked the sale of a ten-million-euro mansion owned by Russian oligarch Roman Abramovich, the Publico newspaper reported on Saturday.

In an interview with Reuters, Kalin told him that he had personally discussed the proposal with Ukrainian President Volodymyr Zelensky in Kiev two weeks ago and that it was still relevant, despite Russia’s disagreement.

18.14. The Group of Seven Industrialized Countries (G7) said on Saturday that it would never recognize the borders that Russia had achieved as a result of the aggressive war against Ukraine.

“We will never acknowledge the borders that Russia has tried to change with military aggression and will continue to play its part in supporting Ukraine’s sovereignty and territorial integrity,” the G7 foreign minister said in a statement.

17.38. Finnish President Sauli Nīniste had a telephone conversation with his Russian counterpart Vladimir Putin on Saturday, in which he informed about the upcoming decision of Helsinki to join NATO, which is expected to be officially announced this weekend.

“The conversation was direct and open, and it took place without escalation. Avoiding tension is important,” the president’s office quoted Niniste as saying.

The telephone conversation was initiated by Finland, the Chancellery added.

16.40. On Saturday, the Kyiv City Council decided to rename the People’s Friendship Arch built during the USSR the Freedom Arch, Vitaly Kličko, the mayor of the Ukrainian capital.

Deputies have also approved a list of 40 memorials to be removed from the streets of Kiev and handed over to the Museum of Totalitarianism.

16.03. The European Commission (EC) intends to recommend to the European Union (EU) member states to set a price cap in case Russia interrupts the supply of natural gas, according to a draft document received by the agency DPA.

“One option would be to limit price formation in such a devastating scenario by setting price caps on European gas exchanges,” the document could be presented to Member States next week.

15.17. The Mariupol metallurgical plant “Azovstal” still has about 600 injured in severe unsanitary conditions, without water and food, a Donetsk district police spokesman, known as the “Police”, said he was in a Russian-run plant.

Police say the hospital is housed in a gym-sized room with dozens of bunk beds and the rest injured on the floor.

14.40. The Group of Seven Industrialized Countries (G7) said on Saturday that it would never recognize the borders that Russia had achieved as a result of the aggressive war against Ukraine.

“We will never acknowledge the borders that Russia has tried to change with military aggression and will continue to play its part in supporting Ukraine’s sovereignty and territorial integrity,” the G7 foreign minister said in a statement.

14.05. The Ukrainian army has launched a counterattack in the direction of Izjum, Oleh Sinegubov, the head of the Kharkiv region’s military administration, said on Saturday.

“The hardest point for us is the direction of Izjuma. There, our armed forces have turned into a counterattack,” Sinegubov said. “The enemy is retreating in several directions.”

He said the accession of the two Nordic countries to the alliance would bring about “strategic change”, but it was too early to talk about the possible deployment of Russian nuclear weapons in the Baltic Sea region, Interfax reports.

Since midnight, deliveries have been zero, admitted Kaukonen.

12.15. The children of Ukrainian refugees may not be ready to study in Latvian in the next school year, as the adaptation time will be too short, such an opinion was expressed by Inga Vanaga, the head of the Latvian Union of Education and Research Workers (LIZDA).

Vanaga stressed that the government, in making such decisions, would need to consult with sectoral organizations that represent the interests of workers, or exactly the people who will have to work with the children of Ukrainian refugees.

11.35. The Riga City Council is still discussing where to place a photo exhibition dedicated to the war in Ukraine, which is currently located in the Victory Park, Raimonds Grants, a representative of the Riga City Council, said.

The Soviet monument in Pārdaugava has been demarcated, thus denying the population access to a photo exhibition depicting the events of the war in Ukraine. Grants stated that the location of the exhibition will not be changed until Sunday, as originally planned.

According to confirmed data, 78 Russian tanks and more than a hundred other units of armored vehicles have also been destroyed, Palamars said, adding that he does not mention the Russian losses, for which the data have not been confirmed yet.

10.03. The loss of life force of Russian troops in Ukraine has reached about 27,200 soldiers by Saturday morning, the General Staff of the Ukrainian Army reports.

The amount of Russia’s losses is being clarified, as the acquisition of information is being hampered by hostilities.

Russia launched another invasion of Ukraine on February 24 on the orders of President Vladimir Putin.

Ten opponents attacked in the direction of Donetsk and Luhansk on Friday, destroying five Russian tanks, six other types of armored units, five cannons and seven cars, the statement said.

09.01. Ukraine is ready to return to Russia the corpses of Russian soldiers killed near Kiev and Chernihiv, as required by international humanitarian law, according to pravda.com.ua, referring to Reuters.

08.01. In Ukraine, 1,015 settlements have been liberated from the occupation of Russian troops so far, Ukrainian President Volodymyr Zelensky said on Saturday morning.

05.11.Two decks of cards with photos of Russian war criminals, politicians and propagandists have been released in Ukraine, General Valery Zaluzhny, commander-in-chief of the Ukrainian Armed Forces, told Facebook.

He recalled that in 2002, the U.S. Army Central Command issued playing cards with photos of searched war criminals to help American soldiers memorize their faces while playing cards.

02. 32. The US Senate must approve a law on new aid to Ukraine in the amount of 40 billion US dollars by May 19, in order not to interrupt the supply of military aid to Ukraine, John Secretary of the US Department of Defense said on Friday.

“May 19 is the day when we really start to lose our ability to deliver without additional authority (..) It will start to affect our ability to provide assistance without interruption,” Curby said.

00.10. Oleg Morozov, a member of the Russian State Duma, said Poland could be “put in the line of denacification”. “Poland, with its statements about Russia as a ‘tumor’ and the ‘contribution’ we have to pay to Ukraine, has put itself at the forefront of denationalisation after Ukraine,” Morozov wrote in his Telegram channel.