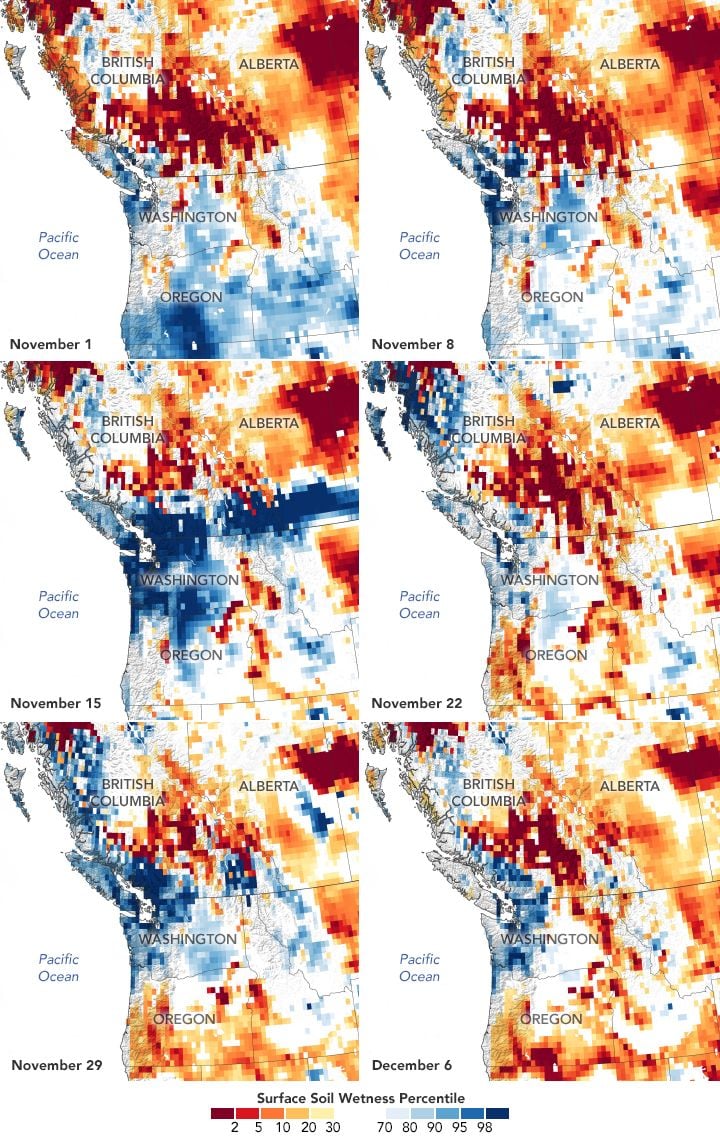 Moisture is especially evident in the region’s soils, which had little time to dry out between storms.

These maps show a weekly “snapshot” of surface soil moisture from November 1 to December 6, 2021, as measured by the gravity recovery and climate experiment tracking satellites (GRACE-FO). The colors represent the humidity percentile; that is, how the soil moisture in those days was compared with the long-term records (1948-2012). Blue areas have more water than usual and orange and red areas have less.

These maps represent the humidity in the top 2 centimeters ground. The humidity in this layer, and a little deeper in the root zone, can fluctuate significantly in short periods of time. Unlike deep groundwater aquifers, topsoil soils are rapidly replenished by rain. See the vast expanse of soils moister than usual (dark blue) on November 15, the third day of a powerful storm. Narrow moisture bands bypassed some places, especially inland areas, where the surface soils remained drier than usual (orange and red) throughout the month.

Topsoil soils are also the first to dry out. Keep in mind that as of November 22, parts of western Washington and southern British Columbia are not looking as wet. But the parade of storms kept coming, with three atmospheric rivers flowing into the region in a week in late November.

Ground-based observers in Seattle recorded about 19 inches of rain from September through November, the most since the records began in 1945. Just over 10 inches fell in November alone, raining every day except five for the month. Further north, a record 37.01 centimeters (14.57 inches) fell in Bellingham, Washington. In British Columbia, the cities of Vancouver, Victoria, Nanaimo and Abbotsford all broke rainfall records from September to November. Some areas in British Columbia are still cleaning and rebuilding after storms and floods devastated houses, roads, and farmland.

When soils are already saturated, the additional rainfall can pose an even greater risk of floods and landslides. Looking ahead, a Hazards Outlook issued Dec. 7 by the US National Weather Service’s Weather Prediction Center noted: “After a wet November, when precipitation averaged 150 to 200 percent of normal, many river levels in northwest Washington are above the 95th percentile. Due to the continuing history of humidity and heavy rain forecast over the next week, a potential flood hazard is heralded for Northwest Washington. This risk of flooding may persist during week 2, as above-normal rainfall continues in this region. ”.

This entry was published in Reports on Dec 10, 2021 by Francisco Martín León