The mystery of why a green comet is solved, here’s the explanation 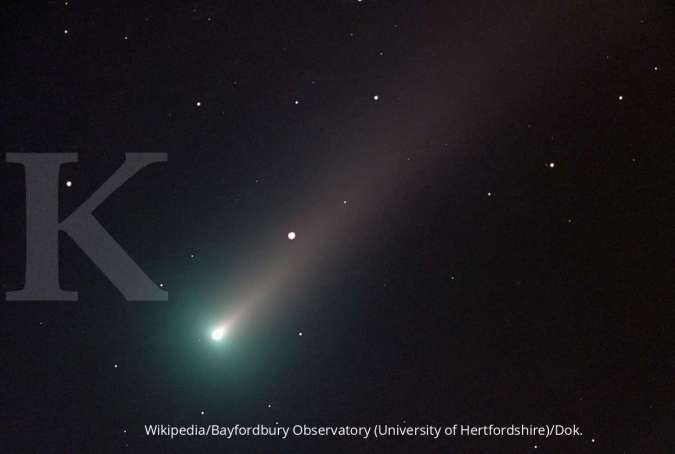 KONTAN.CO.ID – The mystery of why comets are green has finally been solved. The green comet puzzle was solved by scientists who managed to find a strange chemical behind the light.

Have you ever wondered where the green color of the shining comet came from? Speaking of comets, this one celestial body revolves around the Sun.

Having an oval, parabolic, or hyperbolic orbit, comets are celestial bodies formed from ice and dust. Consists of a collection of dust and gas that forms when you are away from the sun.

As it approaches the Sun, some of the comet’s constituent materials evaporate and will form a gas head and tail.

Well, comets are often seen glowing in green. For example, Comet Lovejoy, which shot past Earth in 2014.

The comet emitted a hazy green aura. This phenomenon looks similar to that seen in other comets.

Quote from Scitechdaily, Gerhard Herzberg, a physicist, theorizes, the phenomenon is due to sunlight destroying diatomic carbon, a chemical made from the interaction between sunlight and organic matter in the head of a comet.

However, a new study led by UNSW Sydney, published December 20, 2021 in the Proceedings of the National Academy of Sciences (PNAS) has finally found a way to test the chemical reaction in the laboratory. This also proves the theory for 90 years is correct.

The key word is dicarbon, which is highly reactive and is responsible for giving comets their green color. It is made up of two carbon atoms stuck together and can only be found in highly energetic or low oxygen environments, such as stars, comets, and the interstellar medium.

This dicarbon is not present in comets until these celestial bodies approach the Sun. When the Sun begins to warm a comet, the organic matter that lives in the comet’s ice core evaporates and moves into a coma (frozen matter that sublimates and forms a mist of gas and dust).

Sunlight then breaks down these larger organic molecules, creating carbon.

Also Read: What is the December Turning Point? Also called Solstice, Let’s Check Out the Explanation

According to the UNSW-led team, as the comet gets closer to the Sun, extreme UV (Ultraviolet) radiation breaks down the dicarbon molecules. This process will destroy the dicarbon before it can travel far from the nucleus, and cause the green coma to become lighter and shrink.

The scientists added that this green light never reaches the tail. That is, only at the head of the comet.

“I was blown away that someone in the 1930s thought maybe what happened, down to the level of detail of the mechanics of how it happened, and 90 years later we know that’s what happened,” said Jasmin Borsovsky, lead author on the study and former UNSW Science Honors student.

After 90 years have passed, the riddle and mystery of why the comet glows green has finally been solved.