Pharmacists protest in Al Jazeera state, Sudan. Photo from the Central Committee of Pharmacists of Sudan via Facebook, June 12, 2020. Used with permission.

You have a headache? Imagine not being able to access paracetamol, panadol or vitamin C. Yes, this is the reality in Khartoum, the capital of the Sudan, a country with a dangerous shortage of medicines.

The pharmaceutical crisis began in 2016 when the Government announced that it had eliminated subsidies for all medicines. The opposition called for civil disobedience to pressure the government to reverse its decision, but they did not reverse it. Since then, medicine prices have increased exponentially in Sudan, while the government has done little to ease the tension.

To make matters worse, the government central bank lacks the necessary foreign exchange to purchase essential medicines. Sudan has about 27 pharmaceutical houses that produce about 900 types of medicines, as well as 48 pharmaceutical companies, but this does not cover all the needs of the country. Al-Shifa, Sudan’s largest pharmaceutical factory, was destroyed by a missile attack by the United States in 1998.

Most of these companies import medicines and medical products through the Central Bank of Sudan (CBOS), which faces a severe shortage of foreign currency.

The group created a hashtag # الدواء_معدوم, which means “medicine does not exist.”

Dr. Akram
For now
We support you in the truth and guide you with your faults to the satisfaction of God
Yes, you are deficient
# Medication is non-existent, and no matter how we admit the reasons, the solution remains in your hand, or the people transparently face what is going on behind the scenes.

The doctor Akram [ministro de Salud]: For now, we support you in the truth and guide you with your faults to the satisfaction of God. Yes, you are deficient and no matter how we admit the reasons, the solution is still in your hands, or people transparently face what happens behind the scenes. The citizen dies.

In April, the National Council of Pharmacy and Poisons agreed with the Chamber of Drug Importers to raise the price of drug imports by 16% and to increase the profit margin of pharmacies to 20%. The increase was applied to create a profit margin for pharmaceutical companies.

However, in May, the Health Minister, Dr. Akram El-Tom, canceled the decision with the justification that the price of medicines had increased too much for the common citizen. This decision reflects concern within the ministry.

On May 18, the CBOS canceled 10% of the export product destined for the importation of medicines, which affected its supply.

We sat with the Minister of Health in several sessions since September 5, 2019, before he became a minister, and we presented him with all the medical problems in the last five years, proposals for solutions, and even the amount of medicines in the storages and we told him that we will reach a stage that we may not find Panadol. All these sessions were attended by experts and consultants working in this field. All plans were aimed at providing an effective, safe and affordable medicine for citizens. In February, Sudan’s Central Pharmacists Committee invited a conference inviting all partners from the National Council of Pharmacy and poisons, the Ministry of Finance, the Central Bank of Sudan, the National Fund for Medical Supplies, members of the Sovereign Council and the Ministry of Health, but the Minister of Health did not attend and did not send a representative. The minister’s dealings were with complete neglect of this file, and we every day sounded the alarm to him until we reached this critical stage…

Since September 5, 2019, we sat down with the Minister of Health in several sessions, before he became Minister, and we presented him with all the medical problems of the last five years, proposed solutions and even the quantity of medicines stored. We told him that we would reach a point where we would not find Panadol. Experts and consultants working in this field attended all these sessions. All of the plans aimed to provide effective, safe, and affordable medicine for citizens. In February, the Sudan Central Committee of Pharmacists invited all members of the National Council of Pharmacy and Poisons, the Ministry of Finance, the Central Bank of Sudan, the National Medical Supplies Fund, members of the Sovereign Council and a conference to all members. the Ministry of Health, which did not attend or send a representative. The minister dealt with this matter with complete negligence, and every day we raised the alarm until we reached this critical stage …

In July 2019, the United Nations also stated that the Sudan faces a shortage of essential drugs due to its current economic crisis. 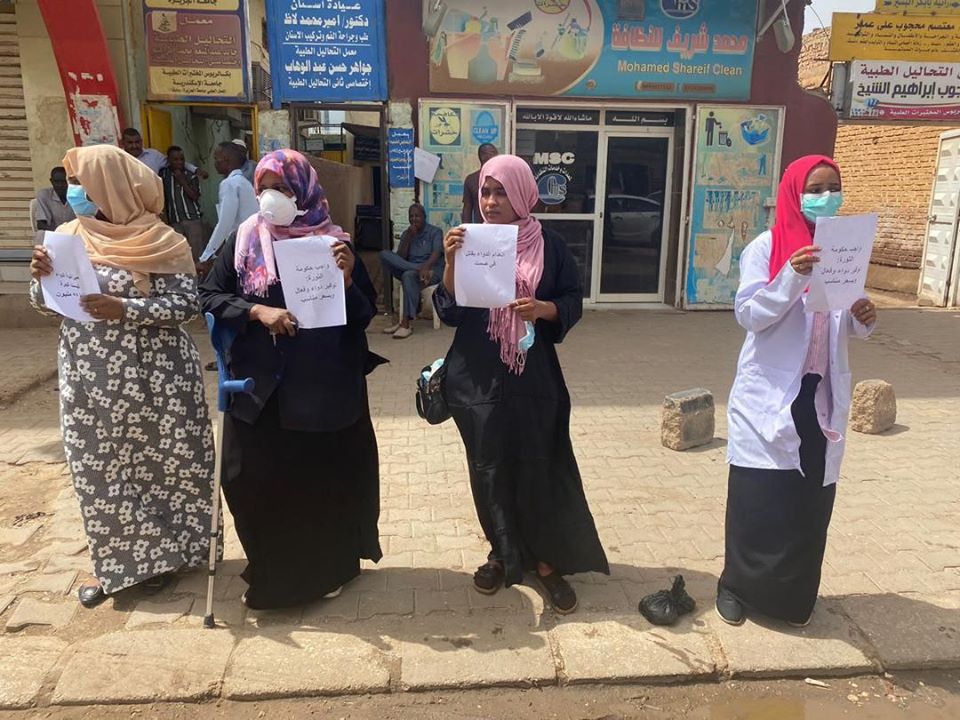 Pharmacists in Sudan protest against the country’s shortage of essential drugs. Photo from the Central Committee of Pharmacists of Sudan, Khartoum, Sudan, June 12, 2020. Used with permission via Facebook.

How did the essential medicine shortage start?

In December 2018, Federal Health Minister Mohamed Abuzaid acknowledged that the “medicine shortage in Sudan was serious,” and blamed CBOS.

According to a March 2020 report by the United Nations Office for the Coordination of Humanitarian Affairs (OCHA), the economic crisis in Sudan continues to affect the availability of medicines.

A CBOS 2019 international trade statistics bulletin shows that Sudan imported medicines worth $ 367 million in the fourth quarter of that year; increase of about 47 million dollars (15%) compared to 2018, but about 91 million less (20%) compared to 2017 (see figure 1). 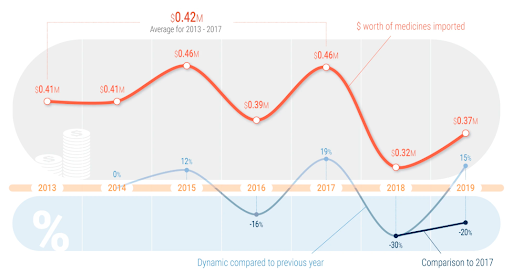 The currency shortage has created a black market that caused inflation to hit almost 118.18% as of June 3, according to a monthly report on inflation in Sudan by Professor Steve Hanke.

The black market is a short-term solution, allowing the drug trade in Sudan to continue through small merchants smuggling drugs from neighboring countries through luggage.

However, these drugs are not subject to quality or efficacy controls.

Smuggling has been decreasing due to the closure of the borders on March 16, a decision made by the Sudanese authorities to stop the spread of COVID-19, making it more difficult to access essential drugs on the black market. 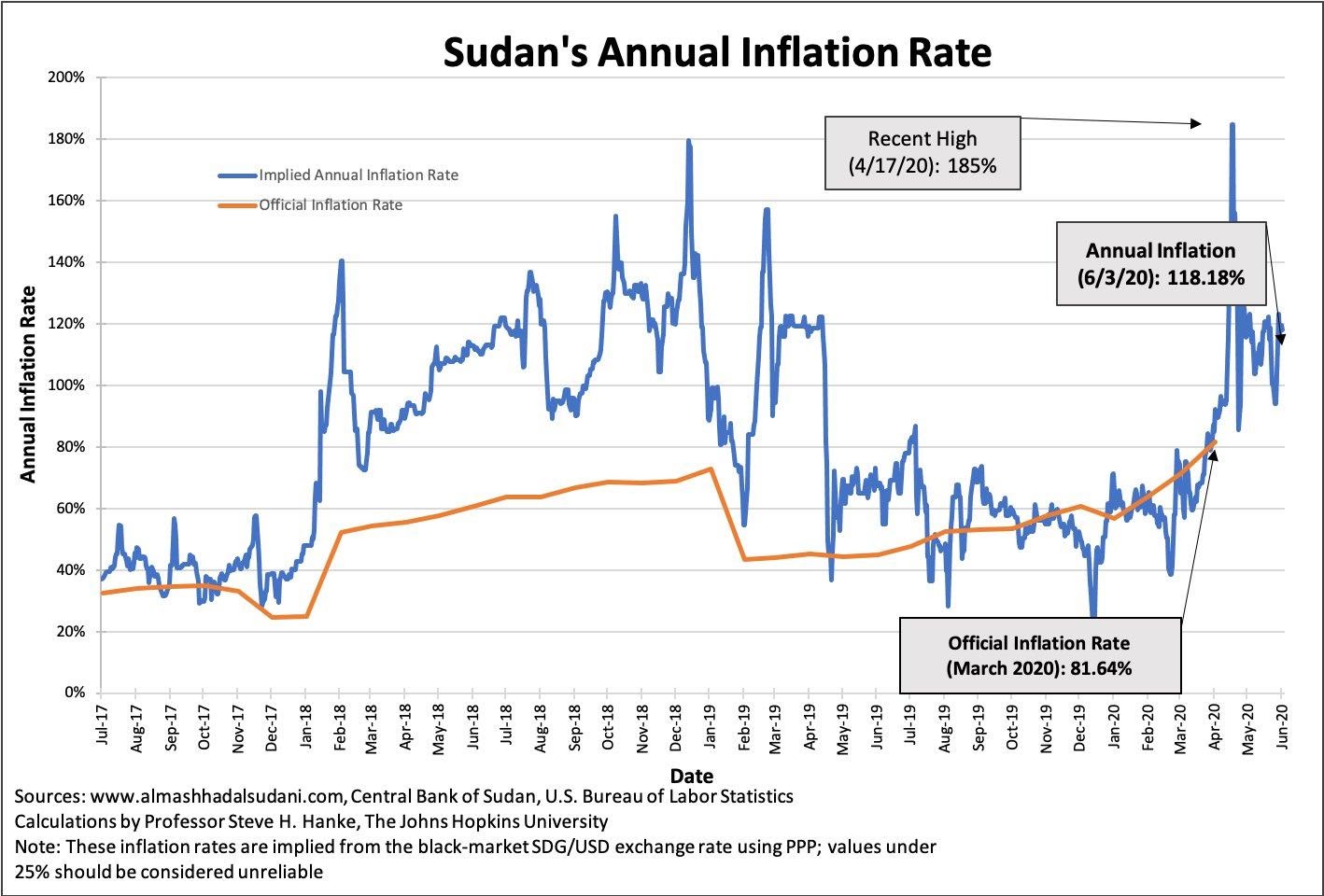 Since March, when the COVID-19 pandemic hit Sudan, the price of personal protective equipment (PPE) increased by more than 300% due to the shortage.

Medical services were almost paralyzed as many patients and doctors stopped going to hospitals and health centers for fear of contracting the virus. As of June 18, more than 8,000 people had been infected with COVID-19 and about 500 died. However, there is no official count of how many have died from other illnesses from a shortage of drugs.

Meanwhile, Sudanese social media have recently skyrocketed with condolences, including one from the Minister of Religious Affairs in which he acknowledges the deaths of several clerics. 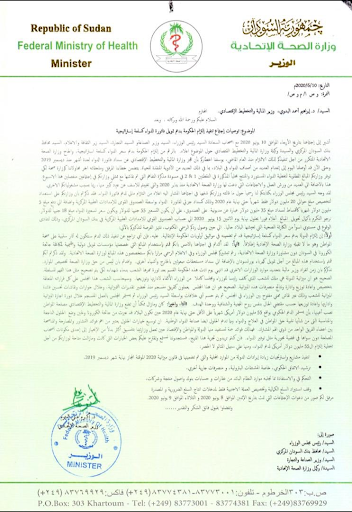 Leaked letter from the Minister of Health, Dr. Akram El-Tom.

The letter also accuses Badawi of not paying the country’s drug bill since December 2019:

I remind you that you promised to provide monthly 20 million dollars as a partial payment of the medicine bill …I remember that the time when the Ministry of Finance made individual decisions to determine the resources of other ministries has ended on the day that this government was sworn in after a revolution that sacrificed the blood of its martyrs.

I remind you that you promised to contribute $ 20 million monthly as a partial payment for the medicine bill … I remember that the time when the Ministry of Finance made individual decisions to determine the resources of other ministries ended the day this government swore after a revolution that sacrificed the blood of its martyrs.

The Ministry of Finance and Economic Planning flatly denies the rumor that this ministry has acted with benefit or in-kind or cash subsidies given to Sudan to deal with the coronavirus and used them for other purposes. The Ministry of Finance and Economic Planning confirms that all these grants and subsidies that have come to Sudan have been fully used to deal with this pandemic …

This blame game makes citizens wonder when and how this crisis will be resolved.

Uninstall Microsoft Edge: How to get rid of it

Tickets for $ 11 anger the airlines!

Airlines are currently trying to reduce ticket prices to the maximum, in order to gain a market...
Read more

This is what happens to the body when eating trotters .. and a consultant warns them of

DOSSIER - A novel about his youth, the original manuscript of Mrs Dalloway, an essay on London, films, theater…...
Read more

Shortly before the start of the season, seven WNBA players were diagnosed with Covid-19

Uninstall Microsoft Edge: How to get rid of it

Loss of smell, symptom of Covid-19: a real handicap