savings of up to 540 euros a year. Six billion on the table 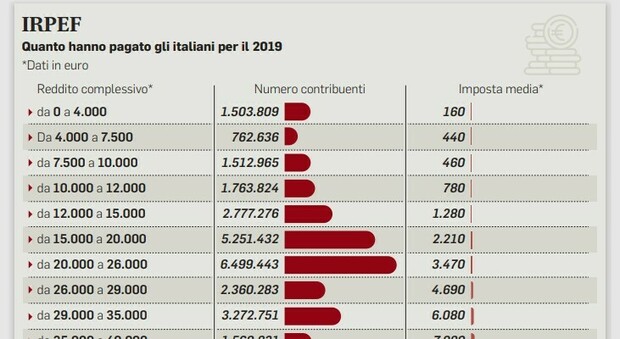 On paper, this is the simplest solution: reduce thepersonal income tax rate 38%, the one that applies to the bracket of income between 28 thousand and 55 thousand euros a year, would mean anticipating for the benefit of the middle class one of the key indications given by the Finance Committees of the House and Senate in their investigation into tax reform. And on the other hand it is a relatively simple intervention to implement, which would not interfere with the subsequent reorganization. Even if on a political level the cards will begin to be discovered tomorrow, at the second meeting of the majority table with the presence of the Ministry of Economy, the intervention on the third bracket remains a hypothesis with a good chance of entering the final menu.

The taxpayers involved would be just over 9 million, those who, having an annual income of 28,000 euros and up, are affected by this rate. Clearly the benefit is growing: minimum for those who are just above the threshold, because the two-point cut would apply to a few thousand euros, and then gradually more substantial. Thus, for example, at a quota of 30 thousand euros, the positive difference on the tax is only 40 euros while those who are in the middle will have a graduated advantage in proportion: with 40 thousand euros of income, 240 less will be paid, with 50 thousand 440 and so on.

Finally, taxpayers with a taxable amount of 55 thousand euros would have 27 thousand affected by the reduction, thus reducing the tax by 540 euros. Which is then the maximum amount of savings, because from this level onwards the next rate (41 percent) is triggered, not affected by changes. Therefore, even those with a high or very high income will always have their personal income tax reduced by the same amount.

The drawback of this approach, if adopted alone, is quite clear: more than twenty million taxpayers would be left dry-mouthed, those who, despite paying something to the State every year, do not reach 28 thousand euros in income. So another option is not excluded: to intervene on the second bracket, which goes from 15 thousand to 28 thousand euros with a rate of 27 percent. The taxpayers concerned would be many more, but inevitably with slightly lower average benefits. Furthermore, the reduction of the second rate would create a “leap” of progressivity in the passage to the next one, which is not perfectly in line with the general objectives of the reform.

In these hours, however, other hypotheses are also being worked on. If the approach that plans to allocate 6 billion to the decrease in personal income tax and another 2 to IRAP or in any case to the reduction of labor costs for companies (out of a total of 8 available) is confirmed, then the changes on rates could absorb more or less than half of the ceiling, while the remainder would be dedicated to an intervention on the current deductions for work; which in the case of employees also take the form of a 100 euro bonus (heir to the one desired at the time by the government of Matteo Renzi). This choice also responds to the desire to specifically reduce the tax wedge on salaries, while a reduction in the rate affects all taxpayers without distinction, including retirees and those with self-employed or other income. Even in this case, however, there is a disadvantage: especially in the event of an increase in the 100 euro bonus, it would go in the opposite direction to that of simplification required by the reform.

In the coming days, the government and the majority will still have to tighten, in order to then put down on paper the amendment that must be approved in the Senate. Meanwhile, the pressure of the unions continues, with the secretaries of the CGIL and CISL, Landini and Sbarra, asking to reserve all the 8 billion available to the IRPEF, in order to reward both employees and retirees.