On day 18 of the new normal, Mexico reached a maximum of contagions of COVID-19

The Secretariat of Health (SSa) reported this Thursday, June 18, that the infections COVID-19 accumulated 165,455. In addition, since the beginning of the epidemic, Mexico has suffered 19,747 fatalities.

In the country there are 23,528 confirmed cases assets, which represent the epidemic active in the country. There are 228,248 negative cases, 59,778 suspects, and a total of 453,481 people studied. José Luis Alomía, Director General of Epidemiology, reported that the evening lecture of today is the number 111, and that it is day 18 of the “New normal”. 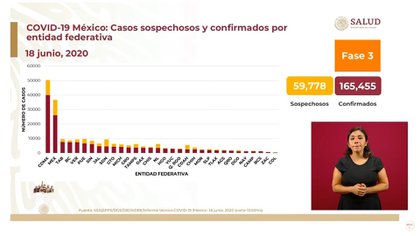 In the map of confirmed cases cumulative reported 129.5 is the rate of cumulative incidence for 100,000 inhabitants. By federative entity, the majority of registered cases are concentrated in the City of Mexico with 40,021the State of Mexico with 26,079, and Tabasco, with 7,593. The minority are in Baja California Sur with 1,122, Zacatecas with 612, and Colima with 339.

In the distribution of the epidemic activefrom 5 to June 18 confirmed cases in the City of Mexico are 4,141, the State of Mexico with 2,655, and Puebla, with 1,340. The three institutions with the lowest amount are: Zacatecas with 177, Chihuahua with 143, and Colima with 89.

The curve epidemic in the country at the June 18, maintains a upward trend when you combine the confirmed cases with suspected cases. The majority of suspected cases were concentrated in Mexico City, Mexico State, Sonora, Nuevo León, and Coahuila. 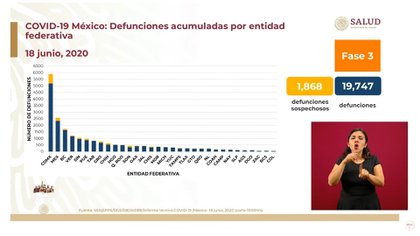 The accumulated charge reports that there are 5,662 new cases confirmed in 24 hours: an increase of 3.5% on the previous day.

Within the availability of beds hospital general in Mexico City there is a 75% occupancyin the State of Mexico, 70%, and in Guerrero a 61 percent. In the beds with fan, for patients with more critical, Baja California recorded a 64% occupancythe State of Mexico 63%, and the City of Mexico by 59 percent. 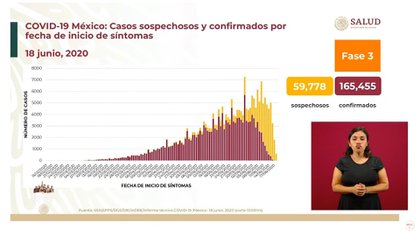 Suspected cases and confirmed by date of onset of symptoms (Photo: SSa)

The pandemic of the COVID-19 in Mexico has mired the national economy in a deep crisis and in the case of the Gross Domestic Product (GDP) has a drop increased to 6%, as well as that the unemployment rates continue to increase, the country runs the risk of lose the advances that were achieved in terms of poverty between 2008 and 2018.

This is a warning released by the executive secretary of the National Council of Evaluation of Social Development Policy (Coneval is used), José Nabor Cruz Marceloin an interview with the daily The Universal, where it also noted that this health emergency will leave as a result to 10 million new poor.

And is that up until now, he noted, there has already been a reduction of three percentage points in extreme poverty, so “yes, we run the risk that they could stop progress or even to miss a percentage of them, ” he said, after explaining that the most affected sectors will be related to the hangover food and the social security.

On the second aspect highlighted that the shortcomings in this field are product of the informality that has permeated the country over the years, “and surely there will be an increase in informal employmentdue to the loss of jobs” during this period, he explained. 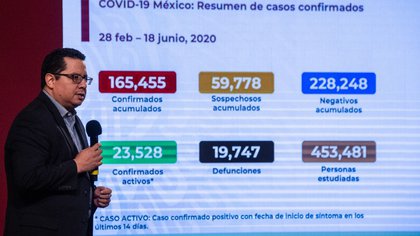 José Luis Alomía, Director General of Epidemiology, reported that the evening lecture of today is the number 111, and that is the day 18 of the “New normal” (Photo: Cuartoscuro)

In the midst of this crisis, some of the sectors that could suffer from a more relevant way the impacts of inequality and povertysaid Nabor Cruz, will be the womenthe indigenous communities in the nation, as well as the minors.

It should be remembered that the chancellor Marcelo Ebrard he had already considered this possibility during the conservatory virtual “women’s human Rights: challenges before the COVID-19”, organised by the Senate of the Republic a few days ago, even though your prognosis not reserved only to Mexicobut the entire Latin american region.

“It is the more severe (crisis) we have lived in our generationalready in course, for an uncertain outcome. We see that before the voltage generated by the economic and social situation it is widening the poverty rapidly. I am sorry to tell you that we’re going to lose what little we have advancedat least in Latin America, in the last few years in terms of poverty, ” the official commented.

By coronaviruses, Mexico could lose the progress of a decade in terms of poverty: coneval is used

The Cinvestav, which develops quick test against coronavirus, reported freezing of 77 million pesos for inputs

Do you want to know what the stars of the Zodiac have in...
Read more

SPKC: The number of Covid-19 cases related to visits to entertainment venues has increased this week – Society and Politics – News

She pointed out that two weeks ago, when the number of detected new cases was small, they were mostly...
Read more

Do you want...
Read more

After a 4-month break, at least some of the...
Read more
News

Do you plan to participate in the Riga City Council elections?