Moscow holds the sword of Damocles over Ukraine 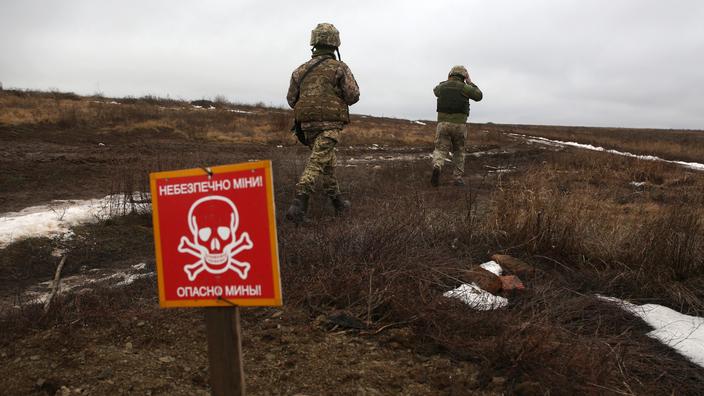 The US government has been accusing Moscow for several weeks of having deployed nearly 100,000 soldiers on the Ukrainian border for an offensive. The Kremlin rejects these accusations.

« M. Not as the Western press sometimes calls it, was aptly named on Friday. During his annual press conference, Sergei Lavrov did not relax the pressure after a diplomatic week in three stages, during which Moscow hammered its demands vis-à-vis the West. Non-enlargement of NATO to the East, withdrawal of Alliance troops and infrastructure from the countries of the former USSR, non-deployment of missiles threatening Russia: the Russian Foreign Minister recalled his “ red lines », already reiterated before the Americans in Geneva, NATO in Brussels and the Organization for Security and Cooperation in Europe (OSCE) in Vienna. Mr. Lavrov even added on Friday two “ red lines by refusing the deployment of offensive systems in Ukraine and a possible American naval base in the Sea of ​​Azov.

Asked what would happen if, as one might expect, the Russian conditions are not endorsed, the head of diplomacy brandished a threat already mentioned in December by Vladimir Putin himself: the implementation of “ military technical measures“, clearly the deployment of additional troops – they are already estimated at 100,000 men near Ukraine – and armament. Mr. Lavrov also indicated that maneuvers are currently taking place in the Far East, images of which were released on Friday.

« The Russian army is planning (…) a military invasion, which could begin between mid-January and mid-February. »

Jen Psaki, spokeswoman for the White House, this Friday.

Around Ukraine, the focal point of this confrontation, the tension is not slackening: Kiev has announced that it has been the target of a massive cyberattack targeting several of its ministries, and to hold “indicesof Russian involvement. Ukrainians and Russians accuse each other of preparing provocations which would serve to trigger an armed confrontation. Accusations also made Friday against Russia by the White House, according to which Moscow would consider mounting operations “under false flag(false flag), an old ruse of war consisting in using the opponent’s uniform to deceive him. According to this source, Washington would be “concernedby Russian preparations for an attack on Ukraine, which could occur “between mid-January and mid-Februaryand be justified by “excuses» such as actions of sabotage or disinformation. Accusations “free“, According to the Kremlin, which could however push the United States to seize the Security Council of the UN.

At the expense of Europeans

For many analysts, however, the option of armed intervention is not the most likely in the short term – for military, economic, political reasons… – even if no hypothesis can be ruled out, as regards, for example, targeted strikes on bases hosting Turkish drones in Ukraine…

Read alsoAndriy Yermak: «Ukraine has the right to know who opposes its entry into NATO»

Because after this week’s three-step diplomatic waltz, an even more uncertain sequence is opening up: Vladimir Putin, faced with the end of inadmissibility of Westerners, has maintained the bidding and increased the pressure. He will have to show results very soon if he does not want to lose face. The real intentions of the Russian number one are the subject of speculation, as he can only ignore his “requirementshave no chance of being accepted by the Americans – they dismissed them out of hand. What then is the objective? Regain the status of privileged interlocutor of Washington on major strategic issues? This process has been initiated to the detriment of the Europeans, whom Moscow accuses of having lost all “independencevis-à-vis the United States and towards which Mr. Lavrov, Friday during his press conference, did not spare his criticisms. “With the European Union, all communication channels have been blocked off by our European colleagues themselves.“, lamented the Russian minister, who was hardly optimistic about an improvement in dialogue with the Twenty-Seven. As for the dialogue last Thursday with the OSCE forum (fifty countries, including the United States and Russia), Mr. Lavrov described it as “dilatory».

On the other hand, with the Americans and, to a certain extent, with NATO, some avenues have been opened. These include arms control, the deployment of missiles and confidence-building measures including a limitation of military exercises. The future will tell if breakthroughs can be made on these points and if Moscow will be content with it. On Friday, Sergei Lavrov also hailed a rare positive point: the renewal, last year, of the New Start treaty on nuclear disarmament.