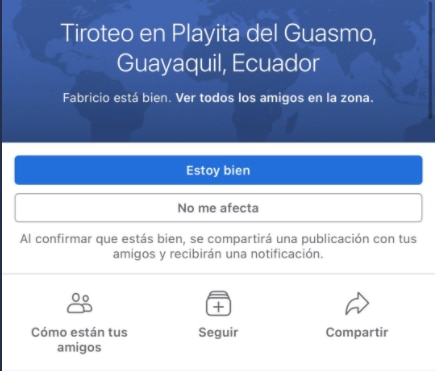 Even Facebook issued an alert and used a tool to find out if its users who live in Guasmo were okay after the shooting on a field.

Several international media have echoed the violent deaths recorded in Guayaquil this week. First, the case of the Dutch tourist who was murdered in the middle of a robbery on the Sana Ana hill was published by European media and alerts from several governments were immediate and warned about how dangerous it is to travel to the country.

After the murder of the tourist, on January 19 the Canadian Government updated the alert and the recommendation to avoid non-essential travel.

In the case of the US, alert 3 has been maintained since June 2021, regarding crime and the health situation of COVID-19.

This Saturday the international network CNN also broadcast the multiple murder recorded on the Playita del Guasmo field, in which five people were shot to death and nine more were injured.

It also had an impact on social networks, as this crime caused an alert from the social network Facebook. The technological giant opened a tool to verify the safety of the inhabitants near the place.

“Several people in your area have indicated that they are doing well during this emergency situation. We want to make sure you are too. A notification will be sent to your friends and a post will be shared to indicate that you are okay. reads in the description of the social network.

In addition to the media and social networks, other prominent figures have referred to how insecurity is affecting the image of Guayaquil in the world.

Ecuadorian writer María Fernanda Ampuero wrote a column on the Dutchman’s case this week on a digital portal.

In her writing, she mentions having seen the video of the desperate stretcher bearers lowering the man down the steps of the hill and the impression caused by hearing a neighbor shout: “don’t let him die”

“I felt, it seemed to me, that ‘don’t let him die’ appealed to everyone: the mayor, the president, the police. To those who can and do not want to end crime in our country”, wrote the writer.

At the close of this edition, the national and local authorities had not referred to the massacre in La Playita and the violence that exists in Guayaquil. Only the Police gave details of the event in the south of the city. (I)