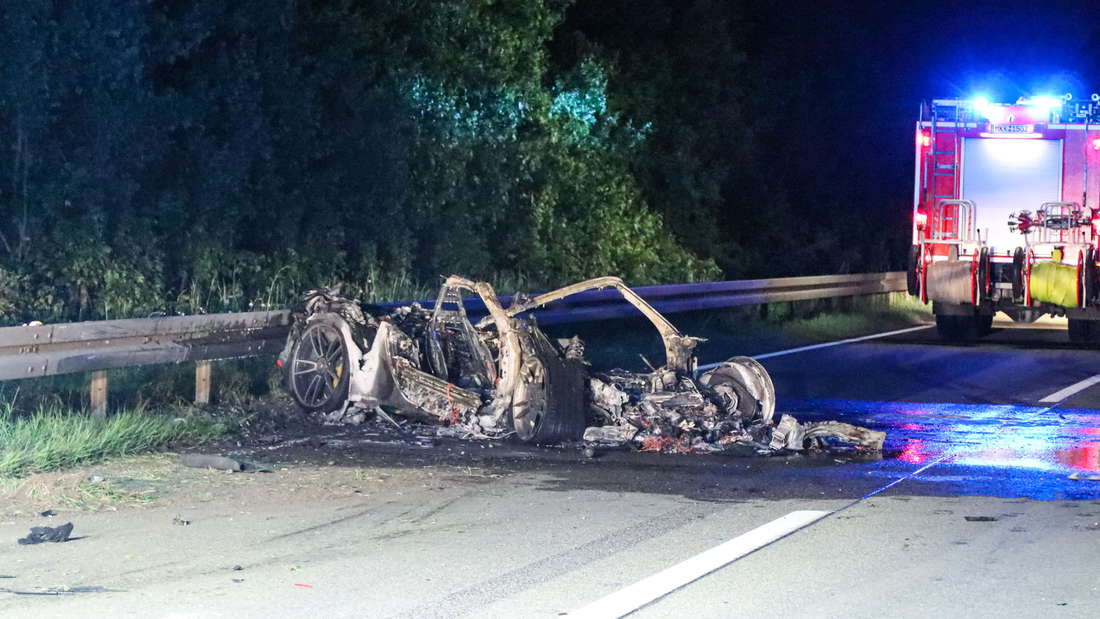 A Porsche catches fire on the A45 near Langenselbold at night. The drunk driver apparently previously had a race in a VW.

Langenselbold – A Porsche caught fire on the A45 on Wednesday evening (May 11). The 50-year-old driver was taken to a hospital with severe burns. Previously, there was an accident with a semitrailer, as reported by the police in Offenbach.

The man from North Rhine-Westphalia was driving his Porsche 911 Turbo on the A45 in the direction of Aschaffenburg. Witnesses told the police that the 50-year-old is said to have engaged in an illegal car race with an unknown driver of a silver Golf 8. The Porsche is said to have overtaken the VW on the right between the Langenselbold-West exit and the Langenselbolder Dreieck. He apparently overlooked a semi-trailer truck driving in the right lane and crashed into its rear.

Accident on the A45 near Langenselbold: Porsche catches fire

The Porsche spun and only came to a stop after about 150 meters at the central barrier. “The sports car immediately caught fire and burned out completely,” the police said in a statement. The driver was able to get out of the car himself, but he sustained severe burn injuries. An ambulance took him to a hospital. The 50-year-old driver of the semitrailer also came to a clinic with a shock.

According to initial police investigations, the Porsche driver had been drinking alcohol – an alcohol test showed a blood alcohol content of 1.45 per mille. The man’s driver’s license was secured. An expert was called in to further clarify the accident near Langenselbold and the two accident vehicles were seized.

After an accident near Langenselbold: One lane of the A45 further closed

The road was closed until around 3:45 a.m. for the rescue work, and traffic was diverted. The Autobahnmeisterei Langenselbold estimates that the left lane of the Autobahn will remain closed for new asphalt at least on Thursday. The damage caused by the police estimates at around 130,000 euros.

Meanwhile, the search for the driver of the VW continues. He is said to have taken off in the direction of Aschaffenburg. The police accuse him of hit and run. Witnesses are asked to contact the Langenselbold police on 06183 91155-0. (pron)

Recently there was a serious accident on the A66 at the Langenselbolder Dreieck. Two 17-year-olds were seriously injured and a rescue helicopter was deployed.