NY [EFE]. The United States has become the world’s largest focus on expanding coronavirus Y NY It is its great epicenter, where such a dire situation has not been remembered since the attacks of September 11, 2001 because experts foresee a “catastrophic” economic impact of billions of dollars.

Despite starring in the most severe restrictions in all U.S, where there are more than 100,000 tested infections, only the state of NY it already has almost half of them (45,000) and in the Big Apple, with a high population density, it has more than 25,500 positives and 366 deaths, a quarter of all those in the country (1,544).

“The economic impact is going to be catastrophic. After 9/11, parts of lower Manhattan were closed for months, but that was only a small portion of the city. The rest of the city continued to function, despite the fact that people were obviously very sad about the attacks, “ economist Nicole Gelinas, from the Manhattan Institute, tells Efe.

The New York authorities have been forceful with the closure of all businesses and non-essential activities, which has drastically reduced the massive presence of people who use to circulate through the streets and transportation of the city and the northern suburbs. So much so that the Metropolitan Transportation Authority is bankrupt and has asked for federal aid of 4,000 million dollars.

The director of state budgets for NYRobert Mujica has already announced that the crisis of coronavirus It will suppose to the State Government a reduction of his fiscal income of 15,000 million dollars, which will affect the total amount of the budgets that before the crisis were fixed at 178,000 million.

But for the economist Nicole Gelinas, we must add to this other losses that the Big Apple will suffer, “whose economy produces around 1.5 trillion dollars in personal income each year, and if it is going to lose around 10% of that amount, this could mean $ 150 billion more in losses.

“Some 800,000 people work (in NY) in hotels, restaurants and retail stores. So being conservative, we may have lost more than half of those jobs, potentially half a million jobs lost, which means more than double the number lost after 9/11. ”Gelinas says.

Another difference that Gelinas points out, between the current crisis and that of 9/11, is that then “people wanted to go out to eat, to Broadway and to support the city and a large number of tourists from all over the country and from the entire world came to New York to enjoy the city. But now, the vast majority of sectors of the economy are simply closed. ”

These losses occur in a context in which, according to various surveys, around 40% of the population assures that they cannot face an extraordinary expense of $ 400 without getting into debt.

“Unemployment insurance in NY is $ 500 a week, which means that this is not going to replace most of the income that comes to be about $ 25,000 a year “adds Gelinas, who believes that the check of $ 1,200 that the federal government has promised for people with incomes of less than $ 75,000 per year will not be enough either.

In addition, he points out that although large companies such as Walmart and Amazon are hiring more people due to the increase in orders through the Internet as a result of the confinement, the small and medium-sized companies in the city are the ones that will suffer the most from the crisis.

“These are the ones who are really stuck struggling. They are going to need help with their rent payments because many do not have the place where they operate,” adds the analyst, who insists that these injections have to be done either through condemnation of taxes or through “subsidies”, because “they will not be able, at any time, to repay loans”.

The markets have not been oblivious to the evolution of the pandemic and even the parquet floor of the NY It closed last Monday, allowing only electronic operations, which are usually already majority.

But in this week without brokers, Wall Street ended up posting weekly gains after the sharp falls of the previous week. The Dow Jones added almost 13% weekly, the S&P 500 more than 10% and the Nasdaq 9%, but the three indicators are still in bearish territory and have lost more than 20% of their value since recent records.

Volatility has characterized the markets in this way since the beginning of this crisis, especially since the COVID-19 has turned the US at the epicenter of the pandemic in the world.

The economic effects are already plaguing the country, which last week registered a historic increase in applications for unemployment benefits, to 3.28 million, reflecting the layoffs caused by the closings of shopping centers, restaurants, leisure parks, theaters and a huge drop in travel, especially by plane. 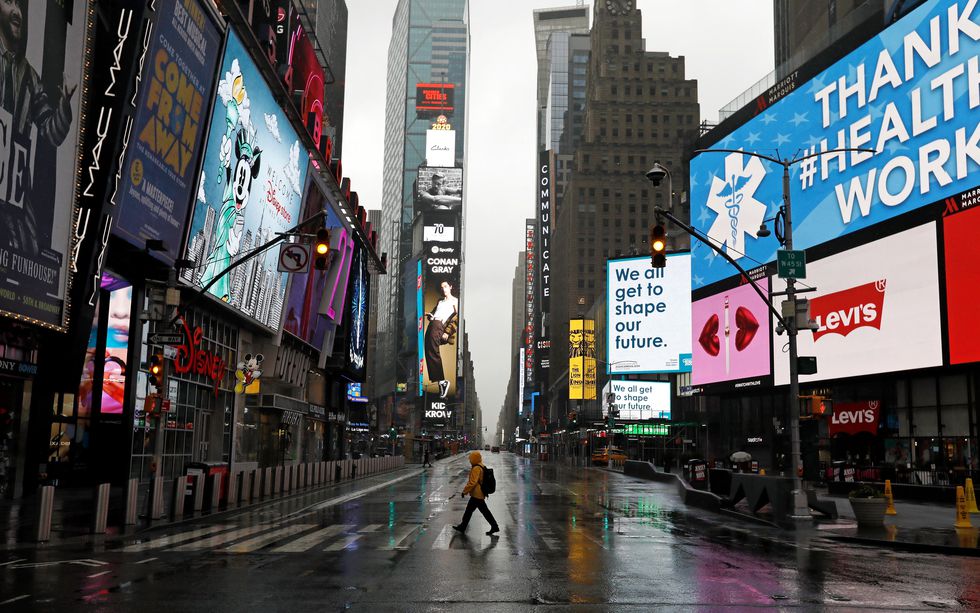 New York is the epicenter of the coronavirus in the United States. (EFE / EPA / Peter Foley).

THE FED AND THE GREATEST STIMULUS PLAN

In this context, the Federal Reserve decided earlier this week to purchase an unlimited amount of Treasury bonds and mortgage-backed securities in a flurry of programs to sustain financial markets in the face of the COVID-19 crisis.

To all this we must not forget yesterday, President Donald Trump gave the green light to the largest economic stimulus package in the history of the country, worth more than 2 billion dollars, with the aim of containing the economic impact of the pandemic coronavirus.

The stimulus plan, which represents around 10% of the country’s gross domestic product, is three times the amount implemented in 2009 after the outbreak of the financial crisis, which totaled $ 700 billion.

The legislation includes an item of about $ 250 billion that will be reserved to make direct payments to individuals and families of $ 1,200 for those with an income of less than $ 75,000 a year plus $ 500 for each child under 17 years of age.

In addition, $ 350 billion in small business loans and another $ 250 billion are available to expand unemployment insurance benefits.

It also awards $ 150 billion to support local and state authorities, and another $ 130 billion to strengthen the health system, which in some places, such as New York State, is beginning to be saturated.

What is the coronavirus?

He coronavirus recently discovered causes infectious disease by coronavirus COVID-19. Both were detected after the outbreak that occurred in Wuhan (China) in December 2019.

Fatigue, fever and dry cough are the most common symptoms of COVID-19; however, some patients may experience nasal congestion, pain, runny nose, sore throat, or diarrhea.

Although the majority of patients (about 80%) recover from the disease without the need for any special treatment, about one in six people who contract the disease COVID-19 You develop a serious condition and have trouble breathing.

To protect yourself and prevent the spread of the disease, the WHO recommends washing your hands with soap and water or using an alcohol-based disinfectant that kills viruses that may be on your hands. In addition, a minimum distance of one meter should be maintained in front of anyone who sneezes or coughs, because if you are too close, you can breathe the droplets that harbor the virus of the COVID-19.

Eiffel Tower and its tribute to those who fight against the coronavirus. (Video: EFE) (Photo: AFP)

IT MAY INTEREST YOU

A new season arrives on this planet about every 9 hours

Forget spring and fall. The planet KELT-9b only has winter and summer. And that is just one of the...
Read more

Probable formation – It is not yet the time for Ibra, two defensive returns

Forget the draw obtained in the comeback with the SPAL and focus on the triptych of fiery matches that...
Read more

Istat: from children to work, Covid widens the gaps in Italy

"Significant" inequalities line our country. And, warn theIstat in the Annual Report, Covid is likely to accentuate them,...
Read more

A new season arrives on this planet about every 9 hours

Forget spring and fall. The planet KELT-9b only...
Read more

Istat: from children to work, Covid widens the gaps in Italy

About 300 people, according to police, marched on Friday...
Read more
News

photos of the building to be rehabilitated and details on the security system.

The identical rehabilitation or reconstruction project of the historic...
Read more
News