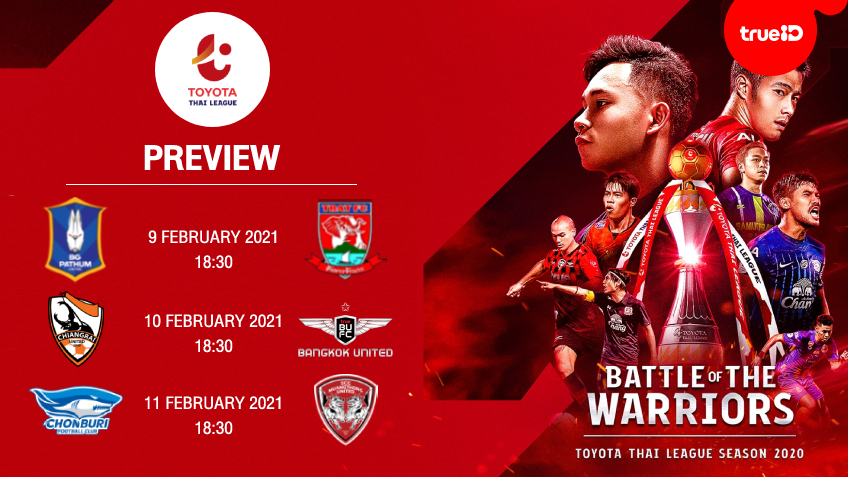 Thai Football League 2020 to compete for the 18th match of the season Continuous On February 9-11, with a game of 3 cool pairs, BG Pathum willOpen houseHit Trat while Chiang Rai is ready to deal with Bangkok, ending with “El Glasico, Thailand” Chonburi meets Muang Thong

Football match Toyota Thai League 2020 In week 18 it was a game in the middle of the week. To compete on Tuesday 9, Wednesday 10 and Thursday February 11, 2021 complete all 8 pairs with an interesting pair of games. “The Rabbit” BG Pathum United The leader of the crowd is open to the visit of “White Elephant Chao Koh” Trat FC Followed by “Kuang Sang great danger” Sing Chiang Rai United Having to face difficult tasks to deal with “Shin God” True Bangkok United

Finish with a classic game. “Battle of El Glasico in Thailand” between “Shark Chon” Chonburi FC with “Kylen arrogant” SCG Muang Thong United As for who can collect 3 points, how much will the ranking of the score table will change? Follow and watch each other throughout 3 days via the channel NBT 2HD and T-SPORTS

The sergeant BG Pathum United, who recently raided to beat the Police Tero on Saturday. By scoring goals in the opening match of Teerasil Dangda and Chatri Chimtalay, who beat their own 100th goal against “Kaew Kaew”, they kept a 7-point distance from the Port Authority. BG will have Victor Cardoso back in charge of the defensive panel again. After being banned from the last game But there will be a lack of important midfielder Sarat who is banned but still has Japanese midfielder Mitsuru Maruoka waiting on standby.

The visiting team, who just lost to Chiang Rai 1-3, put them in 15th place in the table with only 10 points, randomly risking their relegation because they have a score of 13 to 7 points and in this game, “Chang Khao Chao Koh “will lack Supot Wonghoi, a good defender of the team Causing the back panel with the most goals in the league to go down further

In the first game of this season, Trat FC played at home superbly as Yan BG Pathum reached the 70th minute before being hit by Thitiphan Puangchan, hitting the tone of the goal, even though the crowd looked like But Trat FC is a good team in away games because the three games they have won this season are from all away games. One of the three games is a break to beat Muang Thong United and still go to collect the results from Buriram United to Chang Arena, have to see whether BG Pathum will win a casual victory or Trat FC will have a trick. The giant once again

Chiang Rai United after defeating Trat FC 3-1, resulting in the 4th place, with 29 points, but competing 1 game less than other teams after they had Phithiwat Sukchitthammakul to stand with Cho Ji Hoon in the middle made their game smooth again. But with more frequent games than other Chiang Rai teams, the game against B.U may have to turn around for some positions. Because this game will be the fourth game in 11 days, we may be able to see Akanit Panya return to have a real name again.

The visiting team, although the “coach flat” took control of the army, but still could not solve the problem of uneven form, the last 5 games won only 1 game, fell to the 8th place of the table, but in the last game can beat Samut Prakan City got a team that’s on the rise It may be a good sign for the team. In particular, the coordination of Heberty Fernandes and Van der Luiz seems to know each other even more.

In the last 10 games they both met, Singha Chiang Rai won 5 games, True Bangkok won 6 games, but in the last 4 games, “Shin God” never lost the team from the north. Even one game Even in the game that faced earlier this year in the first leg, BU collapsed to 4-1, having to win in this big match whether Chiang Rai will come back to be good at home or not or Bangkok United will maintain excellent form. Can continue from the last appointment

El Glasico, Thailand, circle again, Chonburi FC, the home team who has a ups and downs in form, with the last game just losing to Nakhon Ratchasima Mazda FC and 5 games in the league, they can only win one game. Which “Coach Tia” insists on having to adjust the player turnover from a rather heavy program And set a goal to finish a single number The keyman of the two teams is ready to enter the field, including Renato Kelish from Buriram United and Eleandro from Suphanburi

The visiting team like “Kylen Proud” is in the form of entering the entrance. After taking over the team of Mario Eurovski won two games in a row. And unbeaten for 6 games in a row in every list The injured players will only be Marco Ballini, but Mario has admitted to having to turn the team as well.

The meeting between the two teams was quite close to each other. And have fun with each other in the last 10 games, Chon Buri has won 4 matches, tied for 1 match, with the last home game being “Shark Chon” to win a 2-0 victory. In addition, both teams are brave to push young youngsters of The team comes up to the first team. And became the backbone of both teams Make games on thursday Will become an open exchange game for these young stars to watch in Thailand

For the Toyota Thai League 2020 program, the 18th game is as follows

At the 80th Anniversary Stadium, broadcast live on T-Sports

>> Boiling every field !! Summary of highlights of all goals scored in the Thai League 2020 match 17