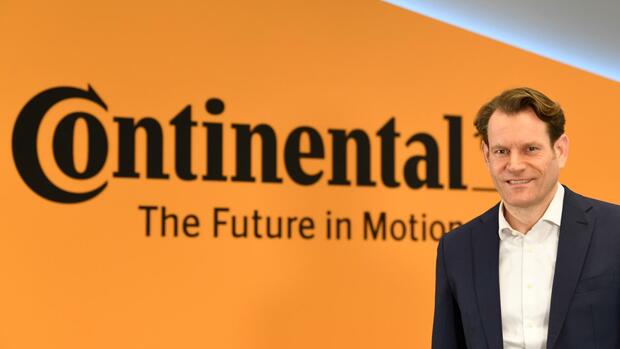 Düsseldorf Nikolai Setzer is starting his first year with a mortgage Continental-Boss. Of the Dax-Group posted a billion-dollar loss in 2020 due to the consequences of the corona pandemic and write-offs on the value of previous company acquisitions. The shareholders acknowledged the result on Tuesday with sales: With a minus of eight percent, the share was the biggest loser in the Dax on Tuesday.

It was a turbulent year. After the unexpectedly announced closure of a tire plant in Aachen, the employee representatives went to the barricades in the late summer of last year. Even CDU boss Armin Laschet got involved in the Conti debate. In October, ex-Conti boss Elmar Degenhart had to give up his post as CEO for health reasons.

Setzer wants to leave all of this behind in 2021 and has developed a future strategy for Continental. If everything goes according to plan, the Hanover-based company will completely part with its Vitesco drive division in the second quarter. Setzer and Conti then put everything on one card. The new CEO wants to align the supplier more closely than ever with digitization, software and sensor technology and completely detach Continental from its internal combustion past.

This also includes a new style: Setzer sees himself as a strategist but also as a boss who actively interferes in the business. At the beginning of the year, the managers at Continental received a video in which the former volleyball player Setzer portrays himself as a player-coach with one leg in the field.

The message: The CEO is not just a strategist, he can also actively intervene in the game. Setzer recently made the solution of the chip shortage a top priority, the greatest challenge in the auto industry at the moment. Setzer appeared personally in discussions with customers and suppliers.

Despite the dwindling revenues, Conti is increasing development expenditure for autonomous driving. “The market for driver assistance and automated driving is growing very dynamically and opening up additional growth potential for us,” Setzer told Handelsblatt. “That is why we are pooling our strengths and increasing our efforts.”

Specifically, this means: Continental will invest up to 250 million euros in addition in this area in 2021. According to CFO Wolfgang Schäfer, a large part of the sum will flow into new heads. Because software experts have become a scarce resource in the automotive industry.

Above all, Conti is looking for experts in the areas of sensor technology – that is, for cameras, radar and lidar. According to Schäfer, the supplier is also investing in new capacities for data management and artificial intelligence.

In the medium term, the company intends to achieve organic growth of five to eight percent per year in this way. “For the adjusted EBIT margin, we have set between around eight and eleven percent, and around 15 to 20 percent for the return on capital employed,” said the Conti boss.

In 2021, Conti again expects sales of between 40.5 and 42.5 billion euros and an operating profit margin of up to six percent. That would almost double the adjusted EBIT margin of the past fiscal year.

However, the core division Automotive Technologies will not contribute much due to the higher investments in the future business and the special costs resulting from the chip shortage, which again costs around 200 million euros. Here Conti expects an EBIT margin of just one to two percent in 2021.

The problems of the core business are manifold. Above all, it suffers from a cost structure that is still too high. In economically good times it was hidden. But the Corona year revealed the weaknesses. A direct comparison with the competition shows that Bosch and ZF do better than Continental despite Corona.

While Conti’s core division had to accept a decline in sales of almost 19 percent, Bosch’s auto segment got away with a decline of 9.5 percent and ZF Friedrichshafen with a minus of eleven percent comparatively lightly. The fact that the decline in sales of the Continental Corporation as a whole is “only” 15.2 percent at 37.7 billion euros is due to its strong traditional tire business.

“Our Automotive Technologies business sector was burdened by several effects at the same time last year,” says CFO Schäfer, justifying the weak result. Worldwide car production collapsed by 16 percent as a result of the pandemic. “In addition, there are special depreciation and costs for our structural program.”

Another problem for Automotive Technologies is that it results from various company acquisitions in recent years – including Siemens VDO, Teves and Motorola – composed. Company experts report that the individual company cultures have never really been harmonized with one another. Various trench warfare over investment funds and personnel are still slowing down Continental’s core business.

According to supervisory board circles, a further slight adjustment of the automotive structure is therefore also in the room. In his first hundred days, Setzer took on a fundamental Conti problem that was never completely solved under Degenhart.

“We are trying to raise the profile of the automotive sector, especially in the area of ​​driver assistance,” says a member of the supervisory board. The goal is a clearer financial structure, especially in the automotive division Autonomous Mobility and Safety (AMS). The changes should also help Conti to work better with new partners. The supplier is likely to envision collaborations with tech companies, such as the one recently announced with the chip designer Recogni.

Continental executive board could be downsized

According to supervisory board members, the structural adjustment of the automotive business could also go hand in hand with a downsizing of the Conti executive board. The board currently has around eight members, which is quite a number compared to other Dax companies.

The focus is primarily on Helmut Matschi, Head of the Vehicle Networking and Information (VNI) department, and Frank Jourdan, Head of AMS. The group is still buttoned up and does not comment on any personal details. But from supervisory board circles it was already heard months ago that the functions of the two long-standing Conti board members might change under Setzer.

The agreement with the employee representatives in the Babenhausen case speaks for a new thread of conversation and the new willingness to compromise on the part of the new Conti boss. Originally, more than 2,600 of the 3,300 jobs were to be cut in the plant, in which, among other things, analog speedometer displays are manufactured by 2025. In January, the Executive Board and IG Metall were able to agree on a ridge extension until 2028.

Employee representatives see this as a success and see the agreement as a blueprint for the other locations affected by closings or job cuts. But Setzer thwarted this hope. “The challenges in our business areas are different and so are the reasons that lead to structural adjustments at locations around the world. Therefore, there is no uniform approach that can be applied equally to all affected locations, ”Setzer informs the Handelsblatt.

No cooperation between Vitesco and Schaeffler

However, it remains unclear how things will go after the spin-off for Vitesco. The drive division will host its first own capital market day on March 25th. It was announced beforehand that Continental is apparently taking Vitesco’s debts of one billion euros into its own balance sheet in order to release the drive division free of debt.

“Conti pays the one-time dowry for Vitesco in order to be able to remove a long-standing loss-maker from the balance sheet. The long-term logic is correct, ”says an employee representative. However, the assumption of debt also meant that the financial burdens of the spin-off would be placed on the profitable Conti divisions. “And in this case that is primarily the tire division.”

A decisive question will also be how Schaeffler will deal with its shares. Because after the spin-off, the family holding company will own around 46 percent of the company, as with Conti. In an interview with the “Süddeutsche Zeitung”, Schaeffler boss Klaus Rosenfeld had already rejected a possible cooperation or takeover of Vitesco.

More: Continental boss Nikolai Setzer: “We will check all investments and control them more precisely”