Cafiero in Washington: the tour that activated the final count to find out how the US will play in the IMF 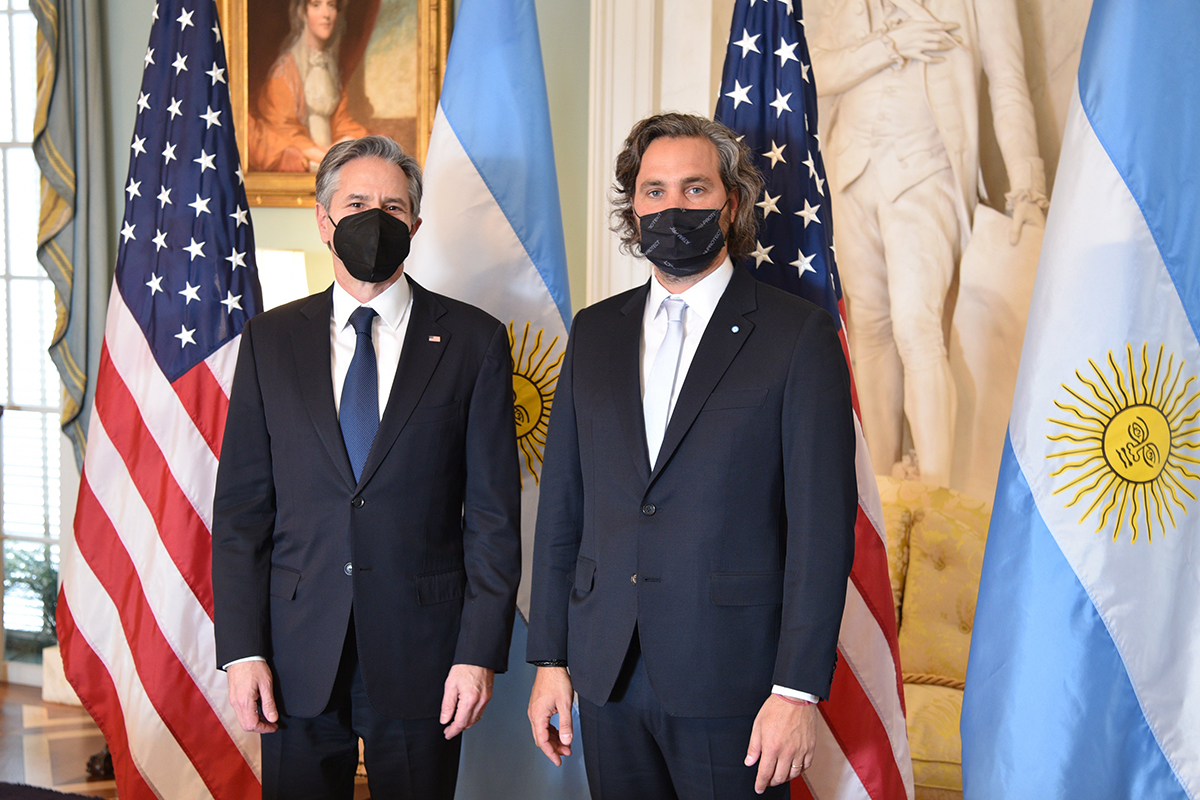 With his 48-hour visit to Washington, Foreign Minister Santiago Cafiero activated the countdown to find out if the administration of US President Joseph Biden will support Argentina before the IMF or maintain the position of the Treasury Department, which could lead to failure. of the ongoing negotiations.

The head of the Palacio San Martín met with three terminals that lead directly to the tenant of the White House. He was with the Secretary of State, Anthony Blinken; then he was received at the Capitol by the head of the House of Representatives, Nancy Pelosi, and later had dinner with the director for Latin America of the National Security Council, Juan González. All the messages had a phrase that the Foreign Ministry reflected in its public communication as soon as Cafiero left the State Dept: «A message from the political authority to the Treasury is necessary to have the support of the United States in the International Monetary Fund, and in this way the growth of Argentina is not restricted».

The path that Biden chooses will be decisive for the future of the bilateral relationship, at a time when the Casa Rosada is also reviewing the possibilities of deepening the bond with China. Quite a limit to the tolerance that Republicans and Democrats share regarding their backyard. The North American president knows that in the next sixty days he will have to resume or undo the previous inflection left by his predecessor, Donald Trump, when he decided to use the majority shareholding that the United States has in the Fund’s board to grant the loan to the government of Mauricio Macri .

When the meeting concluded, the signal sent by the State Department was ambiguous and concise. It fueled speculation about a virtual stalemate in the negotiation. The statement was made by spokesman Ned Price. He explained that Blinken “discussed Argentina’s negotiation with the IMF and encouraged Argentina to present a solid economic policy framework that returns growth to the country.” Almost a repeat of the Treasury demand since the exchanges began and the same warning that Biden officials who visited Buenos Aires have said.

The declaration increased doubts, but it also has its logic. It is unthinkable that a formal communication from the State Department disavows another area, in this case, the toughest sector of the Democratic administration, led by Treasury Secretary Janet Yellen and her adviser and former IMF number two, David Lipton, the The same one who opposed in the Trump era to backing the loan but changed his mind when the tycoon asserted his power.

For now it is not known if the response will be different in the future, but the bilateral meeting of foreign ministers is quite a gesture for an official like Blinken who does not usually hold this type of meeting. Much less these days, where the adventure of US military support for Ukraine, within the framework of NATO, increases the military tension with Russia, the country that President Alberto Fernández will visit in the first days of February to meet with his counterpart Vladimir Putin. He will then continue to Beijing to meet Xi Jinping.

However, Blinken spoke much more than was known during the hour that the meeting lasted. Ten officials from the two countries participated. In front of them, as this newspaper was able to reconstruct, the Secretary of State not only told them that he supports the negotiations with the IMF and that they expect a “positive resolution.” He also defined last year’s growth as “impressive, very important.” Doors outside the Thomas Jefferson room only spoke of “a vibrant economy” and growth “vital for the hemisphere and also for the United States.”

In the Argentine delegation they evaluated that Price’s subsequent statements were not so ambiguous. The spokesman could have omitted to mention the negotiations. When he referred to an economic program he used the word framework, that is, a framework that is linked to growth. That argument is very similar to Cafiero’s words. As soon as he sat down across from Blinken, he candidly asked Biden to define whether he will give free rein to the technical intransigence of Yellen and Lipton or whether he will make a political decision. He also clearly told him that Argentina needs to “grow to be able to pay.”

The Secretary of State did not put down the gauntlet of the political decision that Cafiero asked him for either. Witnesses say that, in the midst of Tuesday’s diplomatic minuet, Blinken was also outspoken for a moment. He acknowledged to his Argentine counterpart that the main problem in the bilateral relationship is due to the loan granted by the previous administration, that is, Trump, to Argentina. The leaked characterization is a clue. It reveals that Biden assumes that the density of the bond will be conditioned by the strictly political, and not technical, decision made by the Republican tycoon who preceded him in the White House.

Blinken suffers first-hand the consequences of the Trump era. He leads a Department of State decimated by officials who abandoned their positions during the Republican government, but the strategic interests of the bipartisan agenda on Argentina have not changed. Just as the Pentagon is playing to prevent Chinese maritime expansion, the State Dept He does not take his attention away from oriental investments and looks closely at the role that Argentina will have at the head of the United Nations Human Rights Council. Washington will put back a representative and reverse Trump’s decision to withdraw.

The topic was part of the meeting with Cafiero and in the face of queries from this medium, they trusted that they agreed to “work together.” “Blinken talked about us being partners in the region,” said one of the attendees who reviewed the meeting’s agenda. They spoke of Fernández’s presidency at the head of CELAC and there were no details about the approaches to Venezuela, Cuba and Nicaragua, although they will be three determining issues in the UN Human Rights Council.

González and Pelosi, China and exports

The list of costs that Fernández could face in exchange for Biden’s support in the IMF are not unknown. Cafiero arrived in Washington after two visits to Buenos Aires by counselor González and his boss, Jake Sullivan. As well as listening to the concern about the debt, they also talked about Chinese 5G technology, the agenda of the Pentagon’s Southern Command and the role they expect from Argentina in the region for urgent issues such as Venezuela and as a counterweight to the far-right president of Brazil Jair Bolsonaro, who has a lousy relationship with the Democratic administration.

Cafiero’s dinner with González was at the Argentine diplomatic headquarters in Washington, where Ambassador Jorge Argüello was host. The meeting was private but was focused on the rosary of issues that Biden’s envoy anticipated last year to the President, the head of the Lower House, Sergio Massa, and the Secretary for Strategic Affairs, Gustavo Béliz.

The adviser for Latin America was seconded by the three Blinken officials who follow the Argentine case: the undersecretary of the Western Hemisphere Office of the State Department, Brian Nichols, and Ricardo Zuñiga, his predecessor in the same position until last year. , who is now in charge of immigration issues in the Northern Triangle. They were joined by Kevin O’Reilly, who was in the same position during the Trump era and was part of the operation that led to IMF credit support.

The names of the American guests at Argüello’s residence confirm that the diplomatic deployment is in full swing. Before reaching that point, Cafiero was also received by Pelosi at the Capitol. At that meeting, Cafiero spoke to seek ways to reverse the 150% tariffs imposed by Trump on Argentine biodiesel exports. The measure implied the closure of annual income of 1,000 million dollars for the sector. So far there are no signs of change, because at the end of last year Argentina lost an administrative appeal filed with the Department of Commerce to challenge these anti-dumping penalties.

In the San Martín Palace they did not detail whether Cafiero spoke with Pelosi about the negotiation with the IMF, but the representatives of the Democratic Party have already presented a draft resolution and sent a letter to the Treasury to review their positions regarding the role of the United States in the IMF with countries with Argentina. The gestures did not go unnoticed in Buenos Aires and had little impact on Capitol Hill. Even so, they are another open front that reveals the disparity of positions on Argentina that surround Biden.