Kotal is playing for his third cup after forty years! I don’t even remember the first two, he laughs 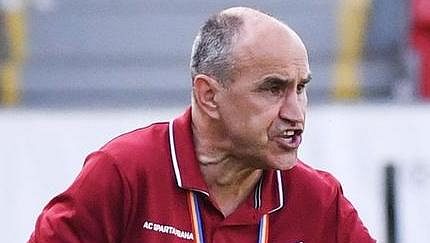 Everything for the finals! Forget about Pilsen, Kotal commands before the battle for the cup

Little did he know that such a chance would come. When he came to the disbanded team after the first spring round, he had had enough of his worries.

“When we took over the team, we knew that there was still a chance for the cup. He was one of the goals. But the main task was to get into the cups at all. We have fulfilled this, now we can create an even better position. We talked about the MOL Cup from the beginning and I am glad that we have the opportunity to win it, “Kotal muses.

The novelty goes to the opponent’s hand

The finals have been played on neutral ground in recent years. This year, for the first time, the organizer is a lesser finalist, with the league table after the end of the basic part being decisive. Sparta has to go to Nisa, which Kotal doesn’t like very much.

“There are a lot of opinions on the news. Internally, it bothers me that it is played on the field of one of the teams, undoubtedly the home environment is an advantage. Maybe it will help us that the organizer of the final is the FACR, so our fans can be at the match. But I saw the distribution of tickets and I’m very curious what the environment will be like in the end, “says the Letna coach.

Read what the coach told reporters before the MOL Cup final! #acsparta

Ten days ago, Sparta defeated Liberec 4: 1 at the beginning of the league superstructure, but lost the previous two mutual duels of the season.

“The players are looking forward to the match. The last time we beat Liberec at home and the opponent will learn, “Kotal is clear.

“We will see what tactics will be. It is one match that decides everything. The line-ups will probably be similar to the last match. He can decide a single goal, so the teams will play responsibly from the defense. I’m looking forward to the finals for the boys after our winning series, a well-deserved reward, “notes coach Sparta.

He sacrificed the mentioned series for the cup. On Sunday in Pilsen, he let key players rest, and Sparta lost there for the first time after eight winning competitive matches in a row.

Share
Facebook
Twitter
Pinterest
WhatsApp
Previous articleThe first direct train connection has set off for Croatia! This is how it will go
Next articleRacism in bobsleigh – a manufacturer without selling a sled to black pilots

Transmitted faster, new mutations in the Corona virus are harmless …

loading... NEW MEXICO - Scientists found that the corona virus has a new mutation. However, although it spreads...
Read more

The face to face of the two sides of economists for the withdrawal of funds from the AFP: De Gregorio and Ramos versus Valdés...

The debate in Congress continues regarding the withdrawal of funds from the AFPs to face this crisis. Today...
Read more

If the pandemic gets worse, younger, at-risk students will be the last to go home | Education

The rule for the next academic year should be that students of all levels of education return to school,...
Read more

WhatsApp: do you use these emojis? Discover its true meaning that few know | Video | Photos | Android |...

Do not get confused. WhatsApp It is not only responsible for facilitating communication among millions, but also for popularizing...
Read more

The rating agency Fitch does not expect the financial situation of Switzerland to change in the near future.Updated 2...
Read more

Fight separation between Barara Sarafian and partner knows no … (Ghent)

Transmitted faster, new mutations in the Corona virus are harmless …

The face to face of the two sides of economists for the withdrawal of funds from the AFP: De Gregorio and Ramos versus Valdés...

The debate in Congress continues regarding the withdrawal of...
Read more

Even Leclerc does not hide the difficulties: "We will...
Read more
Sport

Balaj shoots Lausanne away – The FCA wins at home against Lausanne with 5: 4 – Regionalsport (AZ) – Sport